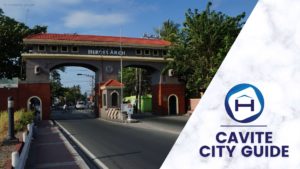 Cavite, officially the Province of Cavite, is a Philippine province in the CALABARZON region of the Philippines. On the southern shore of Manila Bay, Cavite Province is located. Manila Bay and Metro Manila surround this area. East by Laguna; West by the South China Sea; and South by Batangas on the horizon.

In recent years, the city’s broad property market has attracted buyers, particularly those who prefer township living, to the area. Cavite is increasingly becoming a preferred location for contemporary township projects outside the city with its proximity to Metro Manila. As a result, many people who work in Manila choose to live in Cavite because of its ideal location.

Cavite got its name from the word “Kawit” or “Cauit,” which means “hook,” which refers to the contour of the terrain near Bacoor Bay’s coast. The Spaniards mispronounced it as “Kawite” or “Cavite.”

The present-day Cavite City has been given several names. It was given the name “Tangway” by its early residents, the Tagalogs, which means “peninsula.” It was termed Keit by Chinese traders or Sangleyes who came here to do business with the locals, an apparent deconstruction of the word Kawit.

When the Spaniards arrived and lived in the most populated section of the peninsula, they named it Cavite, while the old Tangway, which was located at the northern tip, was named Cavite la Punta, which means “Tip of Cavite.” When they discovered Cavite La Punta to be an ideal location for repairing and building their ships and galleons, they renamed the area Cavite Nuevo (New Cavite). They chose to relocate their settlement here, establishing the Puerto de Cavite (Port of Cavite).

Puerto de Cavite was the site of entry and departure for Spanish galleons that brought numerous international passengers to its beaches during the peak of the world-famous Manila-Acapulco Galleon Trade. “Ciudad de Oro Macizo,” or “City of Solid Gold,” was a popular nickname for Puerto de Cavite. The Chinese Emperor once dispatched some of his warriors to this location, searching for riches.

Because of the prevalence of Marian devotion in this area, it was also known as “Tierra de Maria Santisima” at the time. 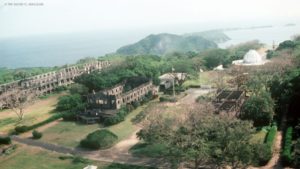 Corregidor Island is a one-hour and fifteen-minute ferry ride from Manila. It is one of the country’s most historic islands, having played a key role in the liberation of the Philippines during World War II. It was strategically placed near the mouth of Manila Bay and served as one of Manila Bay’s harbor defenses during WWII. During the American era, it was known as “Fort Mills,” and it is now a protected area under the administration of Cavite City. It is one of Cavite’s most popular day-tour locations.

This is a must-see tourist attraction in Cavite, and it’s an excellent site to learn about some of World War II’s significant events. Corregidor offers a diverse range of activities. Although a day trip will allow you to explore most of Corregidor’s key attractions, there are various lodgings on the island where you may stay if you wish to stay for the night.

Go on a Hike 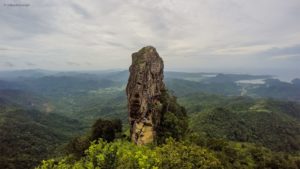 Climbers of all skill levels can enjoy Pico de Loro’s pleasant trails. One can see all the way to Manila Bay and its surrounding islands like Lumbon and Carabao, as well as the famous Corregidor.

This dormant volcano, which rises to a height of 664 meters, has become a popular trekking destination for visitors from all throughout the country. Also, owing to its lower elevation, it’s a great place for first-timers!

Cavite’s skyline and spectacular mountain ridges can be seen from the summit of Mt. Pico De Loro. 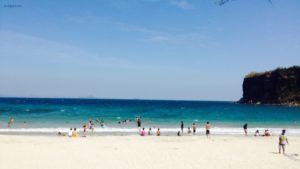 Some travel blogs characterize the Boracay De Cavite beach resort as having varying degrees of pleasure and beauty. What is it exactly about this marine base powdery white sand beach resort in Cavite that amazes some visitors to the area? 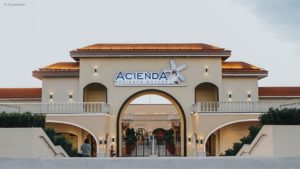 Cavite has its own set of must-visit stores for people who love to shop.

In Silang, Cavite, the Acienda Designer Outlet has become one of the most popular destinations for local and foreign tourists to the Tagaytay.

Shopaholics flock to the Acienda to find a wide variety of designer goods, including handbags, shoes, and clothing. Sporting goods are frequently on sale at this location, with up to 75% discounts.

Also, you can stop by one of the restaurants, bars, kiosks, or coffee shops for a break from your bargain shopping and photo ops.

The Cavite most of us are familiar with is the province that served as the “cradle of the Filipino revolution.” The setting in which they declared one’s country’s independence from Spain in 1898. A port city for the Manila Galleon trade influenced the food provided in the homes of Cavite residents, as well as the dialect you can still hear being spoken by the elderly residents of the province. But in this section, we will focus on the food that Caviteno’s are famous for. 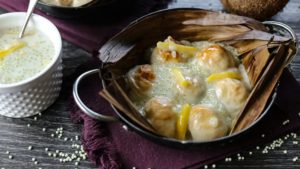 Bibingkoy, a specialty of Cavite, can only be found at Aling Ika’s Carinderia.

The Cavite Public Market is a great place to start your day early if you’re in the city. The hard-to-find Bibingkoy, a specialty of this country region, can only be found at Aling Ika’s Carinderia. It is a kakanin that fuses buchi, bibingka, and ginataan all in one sticky, delicious plate. 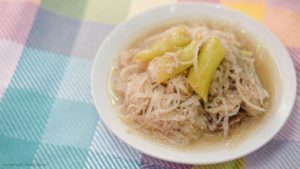 People in Cavite, which was heavily affected by Chinese merchants established in Cavite, enjoy Pancit.

Pancit Puso is a Cavitean pansit made with a blend of bihon and miki bihon cooked in an achuete with thinly sliced green beans, carrots, and cabbage. Pansit puso is served with thinly sliced puso ng saging (banana blossom) fried in a substantial amount of vinegar instead of calamansi as paasim. 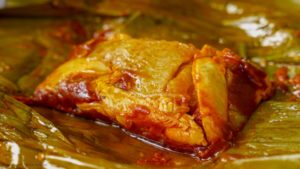 Tamales is one of Cavite’s signature cuisines.

Tamales from Cavite City have become one of the province’s signature cuisines and are a popular pasalubong.

To understand the people of Cavite, you need to know one thing: tamales are their thing. Tamales, a spicy and peppery delicacy, are usually offered during Noche Buena or Media Noche in Cavite.

Tamales in Cavite are cooked using a dough made of ground peanuts, rice flour, and achuete and steamed with pork, chicken, hard-boiled eggs, and garbanzos. Before being cooked again, it is wrapped in several layers of banana leaves. 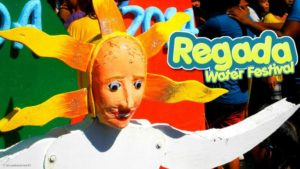 The Regada Water Festival one of the most colorful, wild, and perhaps “wettest” festivities in Cavite.

The Regada Water Festival is one of the most colorful, wild, and perhaps “wettest” festivities in Cavite. The Regada Water Festival will be incomplete without the participation of famous personalities and bands who will join Caviteos in celebrating this spectacular event. If you’re going to this festival, you should bring a gun, specifically a water gun! Arm yourself with the largest squirt guns you can find, or better yet, a pail of water! 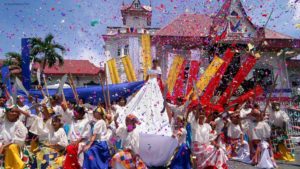 It is a two-week-long province-wide festival that takes place every year from May 28 to June 12. As the name suggests, the festival’s series of events are held to commemorate the Independence Day season. The festival began in 2005 with a range of activities including street dance, a float procession, a beauty pageant, and a trade show.

How to Get to Cavite

Lancaster New City, the area’s most significant township, is easily accessible via many major thoroughfares. The CAVITEX Kawit Toll Exit, the Muntinlupa-Cavite Expressway (MCX), and the future Cavite Laguna Expressway (CALAX) are all accessible from Metro Manila . There’s also an exclusive transportation system that transports residents, visitors, and workers throughout the area at all hours of the day. The LNC Link is a system that features various pick-up and drop-off stations throughout the area, including the Paranaque Integrated Terminal Exchange (PITX), Centennial Road, and Makati.